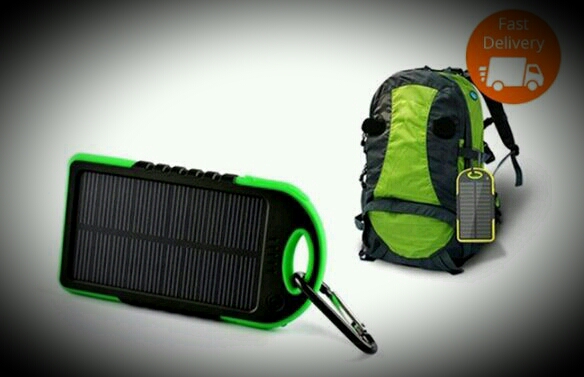 Like everyone, I hate it when my phone battery dies.

I hate it more when I’m out hiking and realise I can’t take anymore photos.

Hiking and photography often go hand in hand as there are so many views and experiences to capture out there.

I’m not much of a photographer and I don’t often heavily edit my pictures to enhance colours or contrasts- nature is beautiful just as your eye perceives it.

I do like to capture the memories though and for that I use my trusty Samsung 6’s camera. Yep, I’m not fancy – I use my phone camera!

When I’m out for the day I can often run down my phone/camera battery without a thought and so I decided to buy a solar battery bank for these occasions, both as a safety measure in case I get lost and so that I can take as many pictures as I like.

The unit has Micro USB input and can be used to charge multiple devices at one time. The bank weighs approximately 150grams – about the same as an average tub of yogurt.

It also makes me look like a ‘real’ hiker. (You know the one- decked out in full ‘The North Face’ gear, wearing reflective sunnies and plotting his course out on his handheld GPS.)

The unit operates very simply. The solar panel charges the bank directly. Plug your device in to the Micro USB port, press the little button on the front of the device and your pretty little lights come on- the device charges. Unplug the device and the solar panel starts to restore charge to the depleted battery. Pretty simple right?

The technology utilised is definitely viable. Often when I test new gadgets I find that the desired utilisation doesn’t ‘work’ because the tech’ is underdeveloped. Charging banks have been around for a little while and it appears they’ve had enough time to iron out the kinks.

A few things to note:

For me, this sort of technology is really a last resort. I won’t rely on this kind of technology to be my only source of power on a multi-day hike but for the occasional extra charge on a day hike this unit performs to my $21 expectations.

Hiking With Kids – Easier Than It Sounds