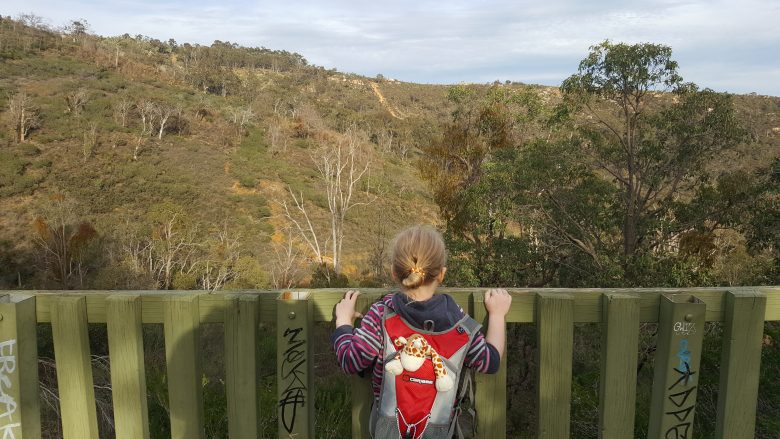 I have walked the 60 Foot Falls trail multiple times and in both directions and every time there is something new to discover- but this time, it’s not what you might think.

Ellis Brook Valley in Martin is home to a few trails and the facilities and roads are quite well maintained including boot scrubbers at the trail entrances to prevent the spread of dieback; but it wasn’t the facilities that captured my attention.

The 60 Foot Falls walk is a well frequented, well loved, dog-friendly trail. It is roughly 2 kilometres in length, weaving its way from the stream at the base of the valley then up some steep and rocky inclines to multiple lookouts with views of both the falls and the city. The area is attractive to birds playing home to a myriad of our feathered friends. Despite the fact that it’s July we also encountered some amazing native flora. But what struck me today was the rubbish.

The Restless Hiker carries my Caribee waterpack (minus the bladder) as her backpack not primarily for food or water but because she likes to collect (safe) rubbish to put in the bin when we return home. She started off collecting honkey-nuts and funny looking sticks but in her treasure collecting she started noticing the rubbish and so we chatted about the fact that some people don’t value the bush like they should and so she decided that if other people didn’t know how to put their trash in the bin then she would help them.

We started the trail in the clockwise direction over the bridge and up to the ridge but it didn’t take long before The Restless Hiker was questioning why someone would write on the rock.

The area is obviously used as a bit of local hangout and with the quarry, the waterfalls and the waterhole that forms in winter, I can understand why.

But the thing is, the waterhole has been fenced off since around 2009 with heavy duty gates now guarding the old entryway. The quarry was shut down due to water quality and microbiological risks. Sadly, that hasn’t stopped locals from ripping down the gates and pulling open the fence.

The thing is I almost wouldn’t care about the fence clipping and I’d be confident that natural selection might prevail if people decided to swim in stagnant water. That is, if it weren’t for the extensive graffiti which now marrs the rock face at the quarries.

How stupid do you have to be to go out in search of a picturesque watering hole only to go ahead and scribe your pathetic tag on the place.

Walking further around the trail up to the wood framed look-outs we noticed the missing frameworks, torn away from the structure, and I was saddened taking a strategic photo in order to avoid capturing the graffiti.

Now, don’t get me wrong we thoroughly enjoyed our hike. We played in the stream crossing, we loved bird (and plane) spotting and we came home with soggy socks and smiles on our faces. But when we arrived home we emptied The Restless Hikers backpack of chip packets, tissues, bottle tops, water bottles and a 1 metre length of cordage, obviously pulled from some tracky dacks.

It’s easy to jump to bagging the local council for a lack of trails maintenance but I think The Restless Hiker has it right.

The reality is that as a society we’re more inclined to point the finger and place blame and responsibility with others rather than looking in the mirror and at what we can contribute.

The Restless Hiker turned 4 years old today – how much more should we be able to take ownership, take responsibility and contribute to the maintenance and cleanliness of our beloved trails?

I urge you to take a small bag with you when you’re out. You’re not going to change the world by yourself but if we all made an effort on even 1 trail a month we could change the experience for the hiker behind us and I reckon that’d be worth it.

What’s Weight Got to Do With It?

Wistful Wanderlust and The Responsibilities of Life