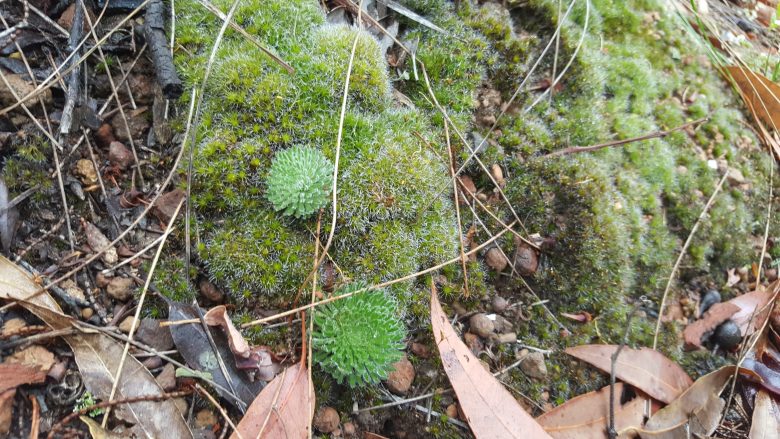 I was very pleased to check the weather forecast last night to find that Saturday would be very mild with showers. A recipe for bush-walking!

The Restless Hiker, The Angry Hiker and I headed out first to Kooribinjal Brook Trails thinking we’ll have a leisurely 3km stroll. Pulling off of Medulla Road we parked the car and headed out following the dry creek bed. The trail was marked with plastic ties around the trees, was not well defined and obviously not well used. We found our way across the creek and realised this tiny trail barely took us out of view of our car so we bailed from here and headed to Langford Park.

Langford Park is located on Nettleton Road, Jarrahdale and was the site of Alcoa’s 1963-1966 bauxite mine. The area was also used for timber felling and you can see both re-growth of the Jarrah forest and the rehabilitation after mining.   The area has a number of picnic areas, gas bbq’s and would be a great spot for an afternoon snag fry.

We set off on the Ken Jones Trail which is 4.5 km trail winding through the park taking you through some varied bush-land. From the picnic area you can follow the orange trail makers to a wooden ‘lookout’ – though I’m not entirely sure what you’re ‘looking out’ to and it’s more of a view point of the picnic area. The trail takes you through the re-growth Jarrah forest, She-oaks and Casuarina’s and there are some nice little trail markers along the way including a ‘King Jarrah’ stump that the kids can stand in.

This area is actually very picturesque and perfect terrain for taking the kids for a nice bush-walk. The trail doesn’t take you far from the main car park and gravel roads but the variation in terrain, some walkways and stairways make the trail quite interesting and after a bit of rain it’s a lot of fun to shake the small trees and soak the kids!

We also took out my new little nifty cooker to test it out. I bought the 360 Degrees Model BL100-B2 from Trailblazers when I was last in Albany. The unit plus the cooking tins and the JetPower Isobutane/Propane Fuel Mix set me back roughly $60 and I bought it primarily for boiling water on longer trips so I don’t have to carry so much… and for a cheeky latte on shorter trails 😉 The Angry Hiker loves a gadget so he was quickly to task to boil us ladies a drink!The whole set up took about 30 seconds and it took roughly 3 minutes to boil enough water for 2 cups of coffee. The unit was incredibly simple to use and all together only weighs 350 grams making it a worthy inclusion to your pack.

Hoping you all get to enjoy some of this glorious weather and if you’re at a loss as to where to head check out Langford Park for a leisurely walk!

Can’t See The Forest for The Trees